As warned, I’ll be posting the awesome handmade goodies I received this past friend’s xmas. Its been almost a month now since the party so I am rather behind (tsk tsk!) which is in no way a reflection of my feelings towards the awesome loot I received! I’m also rather disappointed in myself that I didn’t properly photograph all of the amazing baked/cooked goodies I received. It was a banner year for tasty treats! I received 5 different kinds of amazing cookies (ginger sparklers, chai, shortbread, vanilla shortbread, chocolate butterscotch chip), Bailey’s Irish Cream fudge, chocolate chip zucchini bread, chocolate-chocolate chip zucchini bread, roasted spiced nuts, two kinds of truffles, and boeuf bourguignon! It was so wonderful – thanks to Nven, Floorshow, Gee&A and elektrafying for the goodies :)

So lets start with the knit goodies from knitter extraordinaire, Nven. First up, the second installment of the pirate hat series, Blackbeard’s Pirate Hat, for the boy. She also entered this hat in a challenge on Craftster :) Its an awesome knit and felted tricorne hat with a beard of knit ringlets and, of course, the requisite gold earrings. Seriously, how epic is this. seriously.

I had asked for a snood as my gift, and she did not disappoint. Not only does this somehow magically stay on my head despite my ridiculously slippery hair, but its so great to have on the days where my hair is not fit for public consumption. And you’ve got to love this – the colourway is foxy lady, and it has a bit of glitter in it! glitter! How well she knows me. 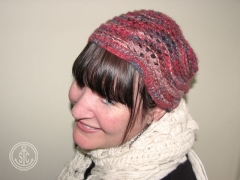 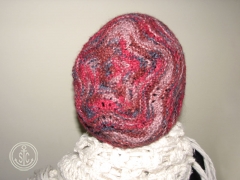 Take a moment and check out her other knit goodies on her blog. Thanks so much lady!!